"Emma Murphy...the Stirling Moss of the recorder world!" IN TUNE, BBC Radio 3
"Emma Murphy...a true virtuoso!" EVENING STANDARD
“IF YOU THOUGHT LONDON’S BURNING WAS THE PINNACLE OF ACHIEVEMENT ON THE RECORDER, THINK AGAIN! EMMA MURPHY DAZZLES WITH ITALIAN CONCERTOS.” THE TIMES ONLINE
"Emma Murphy...a brilliant performer. Playing with virtuosic ease!" THE TIMES
“EMMA MURPHY...SUPERB RECORDER PLAYER...OUTSTANDING VIRTUOSITY WITH MUSICAL INTELLIGENCE & SENSITIVITY."
EARLY MUSIC REVIEW
“Emma Murphy...not only a recorderist of formidable technical skill but also a performer of considerable personal charm…She responded [to Sammartini’s Recorder Concerto] with a beautiful cantabile tone, especially in the slow movement…that was one of the highlights of the entire concert…Murphy dazzled the audience with her mastery of the pyrotechnic passagework [in the Vivaldi Concerti]…The players were frequently accompanied by the percussive rumble of distant thunder, drawn, no doubt, as an answer to the lightning of Murphy’s fingers.” BROADSIDE, USA 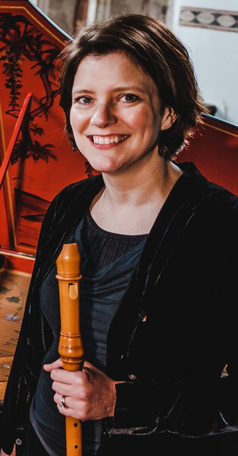 EMMA MURPHY graduated from Birmingham University with a First Class (Hons) degree in Music and University of  London/Trinity College of Music with Distinction in her Masters degree. She studied recorder with Philip Thorby and  Ashley  Solomon. Emma has won numerous prizes including the Hanham Clarke Prize, Roland Gregory Prize and awards  from the Countess of Munster and Foundation for Sport and the Arts.
Emma has performed and recorded with some of the UK’s leading period groups, such as The King’s Consort, Gabrieli  Consort & Players and Ex Cathedra, as well as with the BBC Singers, BBC Symphony Orchestra and CBSO, under  Emmanuelle  Haim and Giovanni Antonini. She plays in numerous chamber groups, including the duo, INTIMITÀ  MUSICALE with Lynda Sayce (theorbo/lute), the renaissance group, PHILOMEL and baroque trio, DA CAMERA with Susanna  Pell (viols) and Steven Devine (harpsichord).
Emma also has a keen interest in contemporary music as both a soloist and with other instruments, such as the viol, viola  d'amore, guitar and marimba, and has had numerous pieces written for her.  Emma teaches on many courses in the UK and  Ireland, and directs workshops worldwide.  Emma has written for and presented on BBC Radio 3, and continues with her  own research and writing.
Emma's solo 'The Division Flute' disc (Signum) is an engaging and popular recording, and Da Camera's
'A Celtic Celebration' (own label) and Telemann Trio Sonatas (Chandos) have received great critical acclaim.